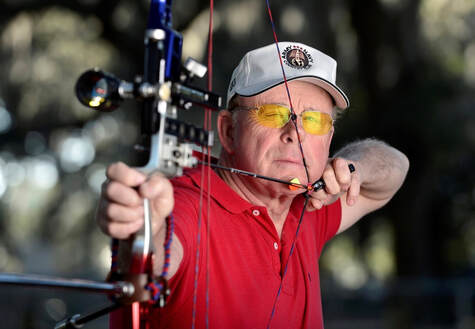 Blair A. Peterson is a retired Colonel, U.S. Army, where he served for 26 years. He served in Vietnam, Korea, Thailand, and at several locations in the States. He was awarded the Defense Superior Service Medal, which is the highest non-valor award presented to service members in The Department of Defense. He holds a Bachelor’s Degree from Idaho State University, a Master’s Degree from The Florida Institute of Technology, and a Ph.D. Degree from The George Washington University. He is also a graduate of The Armed Forces Staff College, The U.S. Army Command and General Staff College, and The U.S. Army War College. He is also a Certified Professional Contracts Manager (CPCM). Upon his retirement from active duty, he served as a Professor at The National Defense University in Washington, D.C.
Blair has been involved in archery for over 60 years. He was an original founding member of the National Field Archery Association (NFAA) newly formed Professional Division in 1973. In that same year, he tied for 1st Place in the U.S. Open Championship (now called The Vegas Shoot). He subsequently lost the three man shoot-off. He has won State Championships (indoor & outdoor) in Idaho, California, Virginia, and Florida. He has also won the NFAA Sectional Championships in the Northwest and Southeast. He was awarded the Certified Instructor designation by the NFAA in 1968.
Blair has served as the president of archery clubs in Idaho, California, Virginia and here in The Villages, Florida. In addition, he has had extensive experience as a writer of instructional material for archery. He served as the Technical Shooting Editor for Bow & Arrow Magazine for four years (1976 – 1980) and he wrote for the NFAA Archery Magazine from 1973 until 1980. His writings on archery subjects have also appeared in Outdoor Life Magazine, Bowhunting Magazine, Bow Magazine (Japan), and Archery Magazine (Japan). His first book, Behind The Bow, was published in 1977. While he was stationed as an Army officer in Bangkok, Thailand, in 1974-1976, he worked with and coached the Thai Olympic Team that competed inthe 1976 Summer Olympic Games in Montreal, Canada.
In 1975 he established his own archery company called “Peterson’s Selector”. He sold release aids and scopes that he developed and had made. The company was in existence until 1980 and all products were sold via mail order.
Blair assumed the duties of President of The Villages Archery Club in 2008. During the years he has served as the club president there have been many positive changes in both the club and in the facilities used by the club. His passion has always been to support the growth and well-being of the club and the members of the club.
In addition to his interest in archery, Blair has been writing poetry and other material for most of his adult life. His poetry has been published in several newspapers across the country. In 2020, his anthology called, My Thoughts In Words, was published.
He is married to his wife, Barbara. He has two daughters, Natalie and Tammie. Dr. Peterson has been a resident of The Villages since 2001.